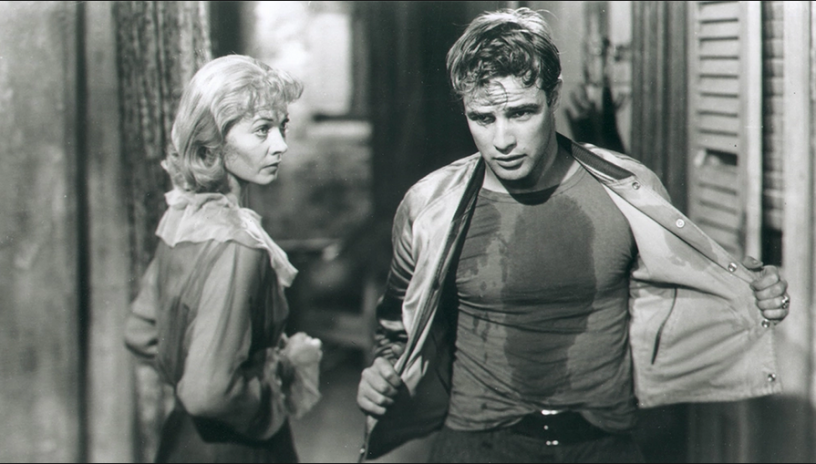 I’ve been cleaning up old files and came across some of my old A-level coursework, including this piece written as if by Tennessee Williams. It made me smile. It’s blowy and cold out, and I’m feeling blue, so I’ve made a hot chocolate and a hot water bottle and put Streetcar on the telly. It’s a little disturbing to be relating more to Blanche as I get older. I too, am increasingly depending on the kindness of strangers…

I have always been more interested in creating a character that contains something crippled. I think nearly all of us have some kind of defect anyway, and I suppose I have found it easier to identify with the characters who verge on the edge of hysteria, who were frightened of life, who were desperate to reach out to another person.

Laura, from Glass Menagerie, is a good example of a character with this frailty and sense of fright. Of course she has an obvious defect, her leg is in a brace, but that is a symbol of a much deeper and more tragic flaw.

Smith is short sighted when she says “It is difficult to see Laura as fully developed, especially since she has relatively few lines”, as Laura has a major role to play in making us think about the destructive nature of the illusion of traditional society or the ‘American Dream’. I very purposefully gave her very few of her own lines, so that the audience’s understanding of her would unfold as they saw her framed by the responses of the other characters. The light on her during the argument in scene 3, concentrating the audience on her reactions to the conflict, is a perfect example of this technique. Initially, Amanda leads us to believe that she is odd, and timid, and utterly incapable.

Her mother has smothered her, raising her on tales of the marvellous life girls should lead, entertaining suitors, attending dances, all the gaiety and romance that she had as a girl that age, only seen through the rose tinted glasses of memory, and from a time when society was different. And Rose can’t compete with that – she already felt clumsy, unattractive, slightly ostracised, but her mother has amplified that, holding her to an unattainable ideal, and that only drives home the point that she is not popular, or confident, or graceful. It’s true that Amanda is a lot like my own mother, who was so desperately attached to us as children, and yet her smothering and high ideals only made us weak and neurotic and unable to deal with real life. This unrelenting quest of Amanda’s to make Laura into something more, while at the same time treating her like glass, is only succeeding in making her more fragile and broken.

And yet I hope that there are glimpses of Laura’s inner strength – a painful reminder of what could have been possible from this girl. Right from the first we see her eager to help, humouring her mother ‘but let her tell it… she loves to tell it’ (sc. 1), and later trying to make peace between Amanda and Tom.

Amanda puts her in a situation, the typing class, that totally overwhelms her, but we see this lovely bit of self-determination from her. She pretends she is still going, but instead visits interesting places and follows her heart. That’s her own little world there, which her mother can’t invade and spoil. She loves this time, so she doesn’t tell her mother, and of course she is also scared to disappoint her. I wanted to show that she has a great inner beauty that, if only it could be appreciated, would be a selling point.

There is no doubt of course that she is fragile by nature, but later, as we see how she reacts so normally with Tom and eventually Jim, we begin to understand that there is more to her than Amanda can see, and we realise the full impact of Amanda’s illusions.

It saddens me that my own mother’s inflexible ideals and misguided cosseting contributed so similarly to ruining us – particularly Rose, who started with such beauty and happiness, and became like a glass unicorn in the end, with no way of escape. Like Laura, I feel Rose could have been so much more if only someone had understood her.

That idea that Laura could have been more, that instead of nurturing, her family have broken her further, is her real tragedy, and I think few of the critics really took that on board. Moe thought that Laura revealed herself as “too fragile… to pursue outside reality and thus becomes its victim” but I think that misses the idea that it isn’t outside reality that she is too fragile for, so much as Amanda’s reality. Jaffee and Lichtenstein summed it up nicely: “Laura repeatedly displays a will of her own that defies others’ perceptions of her, and this will repeatedly goes unacknowledged.”

I grieve for Laura in her predicament, and I hope that the audience will also grieve for her.

Laura is a beautiful soul, and Tom can see how Amada is sabotaging her with only the best of intentions, and that is frustrating for him to watch. In the end he realises that he can do nothing to help it. Certainly part of Tom’s final speech in scene seven, “Oh Laura, Laura, I tried to leave you behind me, but I am more faithful than I intended to be!” shows how conflicted he still feels about it years later, and of course mirrors how helpless I felt about my sister’s situation.

Blanche is a character who is very definitely on the verge of hysteria. She sounds a lot like my aunt did: slightly hysterical yet always eloquent. She is desperately reaching out to those around her, and, as with Laura, instead of supporting her they undermine her. Unlike Laura, whom I portrayed as an innocent victim, Blanche is very much more complicated.

She is another character for whom the pressure of an upbringing espousing high ideals and a sense of duty is conspiring against her in the real world. Where with Laura we had a sense of futility about the future, with Blanche we have arrived at that future and it is just as bleak as we feared. She has well and truly lost her way, her misguided attempts to find a protector have ended in failure and embarrassment, and now she is reaching out for help.

She quickly seems neurotic and unhinged, but I think I have shown brief glimpses throughout the play of her underlying intelligence and grasp of the situation, like when she says candidly to Stella in scene four “it brought me here – where I’m not wanted and I’m ashamed to be” – at once admitting her own fault in her situation, her recognition that she is unwelcome, and her shame.  Another contrary thing I love about Blanche is that she is melodramatic, but that does not automatically mean she is wrong. There is a lovely example in scene one as she describes the difficult times at Belle Reve and how she ‘fought for it, bled for it, almost died for it!’, and we understand that she really did fight to keep it, she certainly lost money and the chance at normal life for it, and she undoubtedly died inside because of it.

She is a complex character, filled with ambivalent behaviours: her promiscuity versus her propriety is a major stumbling block for her. I have tried to portray her in a way that will allow the audience to experience this ambivalence, to be filled with both revulsion and sympathy in much the way that Blanche views her own life. In a way her story epitomises the age-old human problem of what we desire, and what we are willing to compromise within ourselves to get it.

In many ways Blanche’s relationship with Stanley reflects my experience of my mother’s propriety juxtaposed with the way my father mistreated her.

I’m not sure I agree with Woolway however, who felt Blanche recognised the “combination of passion and violence in love” and “appears strangely fascinated and not entirely repulsed.”  While she may have understood that violence can be tied up with sex (‘the only way to live with such a man is to go to bed with him’) she does not submit to the idea that it has a place in an ongoing relationship. She may have found the power struggle with Stanley exhilarating, but for me her southern sensibilities precluded her recognising that she was putting herself in any kind of sexual danger, although of course she can see this immediately in hindsight. Kazan speculated that the ‘promise of violence exhilarated’ me personally, and he is right if my days of risky promiscuity are anything to go by, but it hurt and offended me too, and like Blanche I am not sure I have ever reconciled the two.

The interpretation of Blanche’s fate by several critics, as simply the punishment for a fallen woman, is ill considered. Galloway understood that she is actually “an intelligent and sensitive woman who values literature and the creativity of the human imagination, she is also emotionally traumatised and repressed”. Fate has dealt Blanche some blows, which she handled immaturely, and from which her life has spiralled out of control. Would it have been better if she had forsaken her duty at home and gone off to make a life for herself as Stella did?

Her real tragedy is that in her hour of need the people she reaches out to spurn her, and she suffers a cruel fate. Her separation from family and her loneliness shows in the line, “I have always depended on the kindness of strangers” (sc.11). I feel a terrible sorrow for Blanche’s past, and how it has led inexorably to her current circumstance, but I do not grieve for her in quite the same was as I do Laura. One small consolation I did make to the audience, and perhaps as hope for myself, is that in the end she is taken to a place where her illusions will be tolerated as something normal.

Smith, Nicole. “The Tragic Figure of Laura in The Glass Menagerie by Tennessee Williams”     http://www.articlemyriad.com

Our time to shine is still coming, it’s just taking the scenic route.

If a source told this to a competent journalist working for a functioning newspaper, it would have been left out of the original story, an investigative reporter would have been assigned, and the resulting investigation would be front page news a few weeks/months later. https://t.co/FqHijJtlBc

TIP: One of Google Reverse Image Search's disadvantages wrt Yandex has been the ability to identify buildings or streetscapes. I'm having cases now where Google Lens is outperforming both. Not to say any one is simply "better", but remember to have all as options
#osint